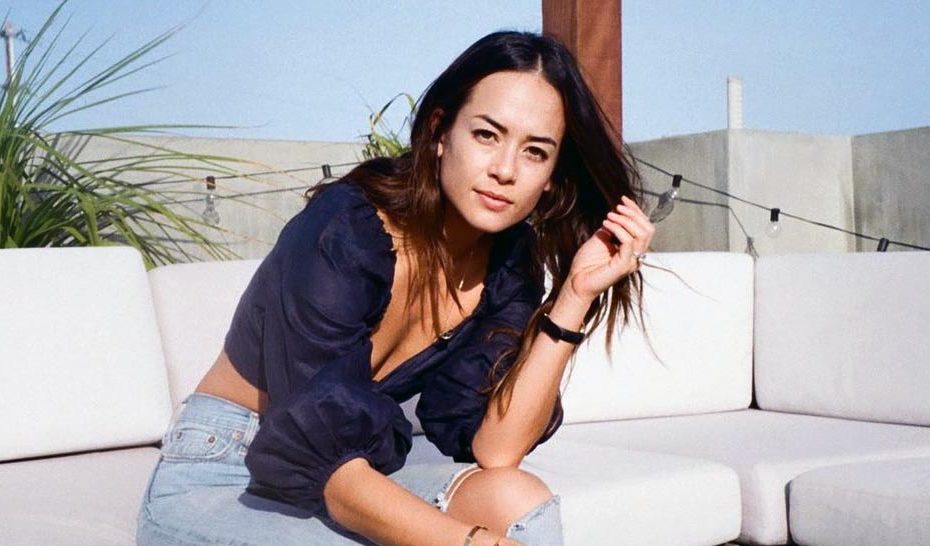 What are her net worth, age, and bio? More importantly, she learned everything about their marriage and their kids in her bio.

Who is Andrea Thoma? Wiki-Bio

Andrea Thoma is perhaps notable to most people as the wife of Grant Gustin, a famous actor. However, Andrea Thoma Gustin is also a physical therapist and social media personality who teaches and advocates for fitness and exercise to better health. 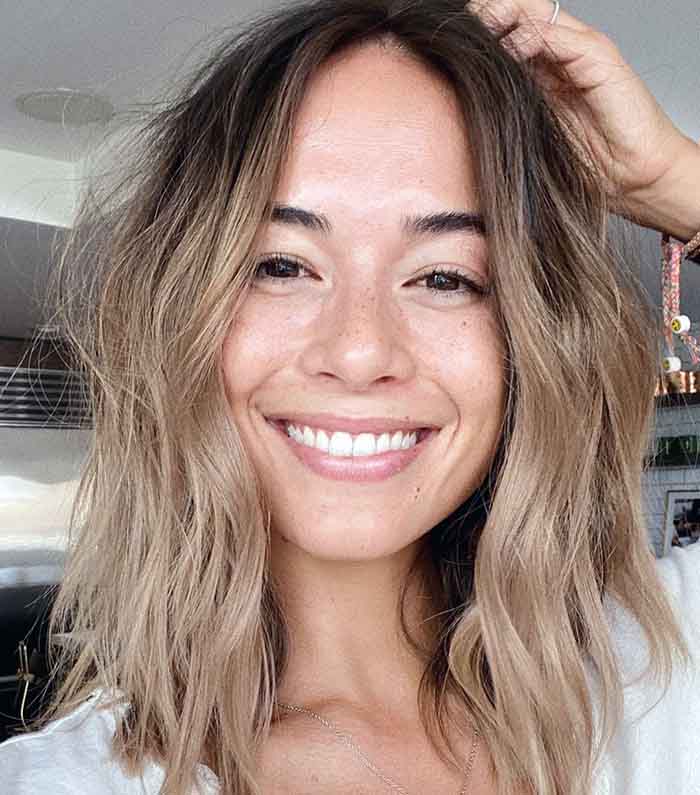 Andrea Thoma and Gustin Grant have been dating since January 2016, although they did manage to keep it a secret and not reveal it for much later. Grant recently broke up with his ex-girlfriend, Hannah Douglas, so you would expect him to take things slow.

However, he fell for Andrea so hard that he was ready to propose to Thoma within a year of their dating. He was planning to pop the question in Costa Rica as he was going to film for ‘The Last Full Measure,’ making it inconspicuous. 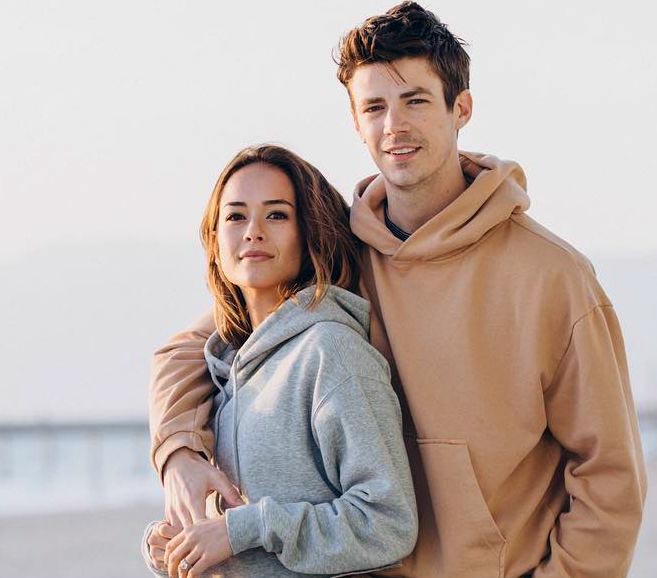 However, the movie was already 20 years in the making and was still facing postponement. Eventually, Grant Gustin was so sick of waiting that he decided to propose to her casually on April 29, 2017. So, he was going to propose to Andrea Thoma on the beach where they regularly did exercises. It went just as well as you would think an impromptu and sudden proposal will go -with many mishaps here and there.

“I forgot the ring was in my backpack. When we were sitting on the beach afterward, I thought she saw it. It turns out she hadn’t”

When he was able to show her the ring and ask her the important 3-word question, Andrea’s reaction was the fear of every guy who proposes to their girlfriend. She began laughing because it was just so random, but in the end, she did say “Yes.”

Grant later shared the good news with his fans on Instagram with a picture of them in an embrace as Andrea showed off her engagement ring.

If you search in most sites, including Andrea Thoma’s bio page, you will learn that she was married on December 15, 2018. It is technically correct, but in spirituality, the couple was married more than a year ago. You see, Andrea and Grant took a trip to Andrea Thoma’s ethnic origins of Borneo. Borneo’s third-largest and Asia’s largest island belongs partially to Malaysia and Indonesia, and Brunei.

Andrea Thoma comes from a Kodazan ethnicity, which is one of the ethnic minorities of the island. When they went there in December 2017, the two had an informal native wedding ceremony there to respect and please Thoma’s family, friends, ancestors, and culture. The intimate ceremony was still somehow able to find its way to the fans, who began suspecting that the two were married.

Thoma went online to get the records straight that she indeed wed Grant Gustin, but it was ceremonial and not a formal one. 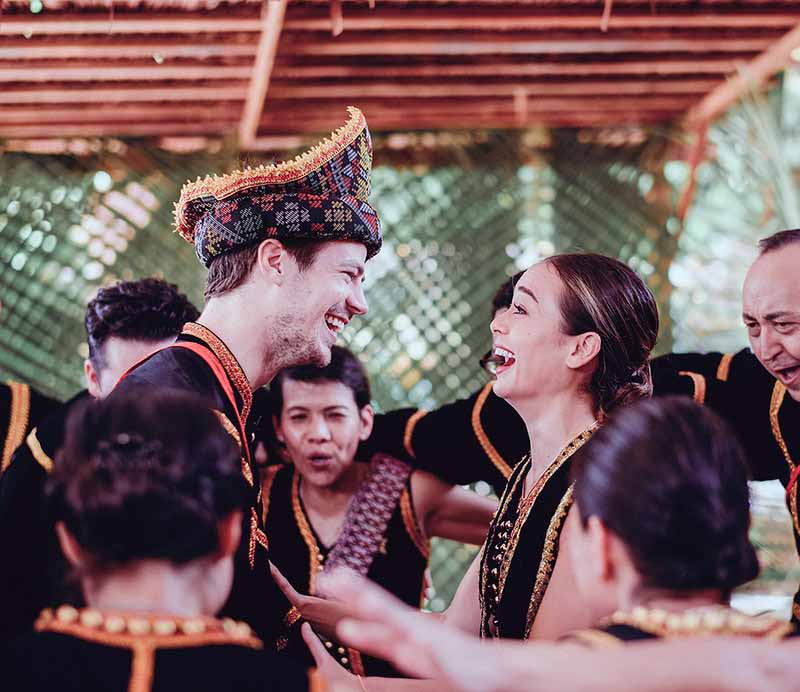 Andrea Thoma’s Malaysian wedding with her husband, Grant Gustin, in 2017.

The two would get formally married on December 15, 2018, in Valentine, a 9,000 square foot property in DTLA. A good crowd of friends and family were among the guest list, including his Arrowverse co-stars, Melissa Benoist and Chris Wood from ‘Supergirl.’ Other stars in the guest-list were Broadway actors like Daveed Diggs, Taylor Trensch, Adam Kaplan, and Ben Ross, among others.

As we said by career, Andrea Thoma is a physical therapist and, over the years, has become a bit of a YouTube and social media personality who makes workout videos for all kinds of situations and people. She also promotes all kinds of fitness and exercise for a healthier lifestyle.

Her YouTube channel is ‘Dare To Be Active with Dr. LA Thoma Gustin‘, which has over 50.3k subscribers and a collective of over 1.5 billion views. She mostly does videos about every workout imaginable, from the core to the whole body.

A lot of videos also see her working out alongside husband Grant Gustin. Furthermore, she also makes videos for rare situations like working on one’s postures or workout for pregnant women. All in all, we gain an idea of her experience from her vast videos.

She also has an Instagram page where she follows a similar trend of advocating exercise, fitness, and health. She has an Instagram following of over 713k followers. Despite her social media fame and earnings, her primary profession in real life is being a physical therapist. She was already working in Virginia and Connecticut for five months before her graduation from Kent State University in 2009 with a BS degree in Exercise Physiology.

Furthermore, she would later complete her doctorate with a Ph.D. from Old Dominion University. She now operates in Sunnyvale, California, after moving state with her husband. She is more famous on social media and her profession as Dr. LA Thoma Gustin.

Her net worth must be huge with the salary she gets from all ventures of her career. However, for the time being, Andrea Thoma’s net worth and salary remain under review.

According to ‘Social Blade,’ her YT can earn as much as $350 a month and $4,000k a year, which is quite impressive for being a side career and a hobby.

Physical Therapist is a thriving profession in a place like California. Physical Therapists are known to make an average yearly salary of about $73,000 a year. We still don’t have adequate information, but her salaries are enough to earn her a net worth of $250,000 to $500,000. Furthermore, we know her husband, Grant Dustin’s net worth is a massive $5 million.

How Old is Andrea Thoma? Her Age & Biography

Andrea Thoma was born to parents James and Judy Thoma. Despite growing up in Ohio and America her whole life, Thoma has a solid connection to her Malaysian and Kodazan ethnic roots. Her mother did well to ensure her children did so by communicating in their native tongue at home.

She has three siblings, two brothers, and one sister, Jonathan, Louise, and Christian. The 32-year-old went to St. Thomas Aquinas High School. In her senior year, she was chosen to play for the NSCAA/Adidas All-Region III, wherein in one game, she set a solo-game record of 6 goals. She went on to play for the club Greater Akron Premier, but despite a great start and statistics, an injury put her on the bench right after one season.

Furthermore, she was also able to play Division 1 when studying at Kent State Uni. She was among the honorable mentions for the Academic All-MAC Team in her sophomore year in 2008. She was the 19th player in the University’s history to score multiple goals in a game.