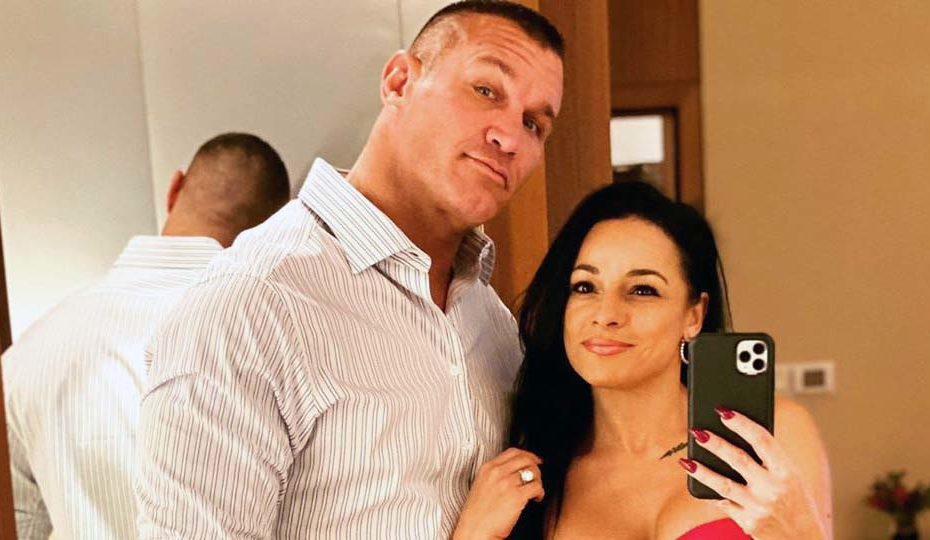 We all have our celebrity crushes, and we dream about how one day we meet them and make them fall in love with us. While some of us are limited to these fantasies, Kim Marie Kessler got to live it in real life. Here is the entire story of how she met, fell in love, and eventually married her celebrity crush, wrestler, Randy Orton. Also, learn about their children in their married life.

Kim Marie Kessler is an interesting person herself. No harm in discovering her own net worth, bio, and controversies along the way.

Kim Marie Kessler first met her future husband, Randy Orton, in 2012 when his marriage with his then-wife, Samantha Speno, was reaching a breaking point.

Kessler was a big fan of the Orton and even ran a fan page of the WWE superstar. They met at a party, and Kessler was too nervous even to approach him. Luckily, she wasn’t the only one as Randy Orton was also nervous as he saw her but still mustered all the courage he could and approached her. 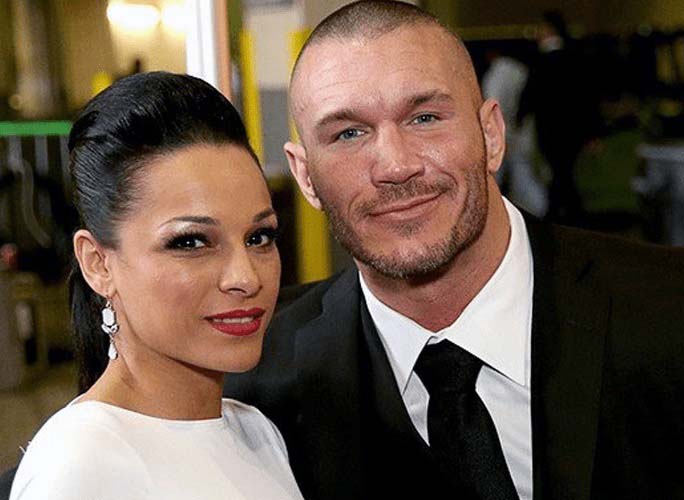 Kim Marie Kessler began dating from March 2012, shortly before officially separating with ex-wife later that year. Kessler and Orton have never really kept that part of their dating life a secret as it wasn’t anything wrong.

Randy Orton and Kim Marie Kessler were engaged on a romantic Bora Bora vacation in early July 2015. Randy and Kim were married later that year on November 14, 2015, in Las Vegas, Nevada. All of their 4 children from their past marriages (Randy has 1 daughter and Kim has 3 sons) attended the function to show us the beautiful blended family.

Kim Marie Kessler was Married in the Past with 3 Children.

Kim Marie Kessler, like her husband, was also married in the past. Her first husband’s name or identity is unavailable, so you can guess that we have no idea about her past relationship and marriage.

However, even you and we may be well aware of her three children, all sons. Their names from oldest to youngest are Michael, Rob, and Anthony Kessler.

Her Oldest Son is in College.

Kim Kessler also proudly announced that Michael was selected to the prestigious New York Film Academy, and a video of Michael reading the monologue of ‘Roses are red.‘

“We’re all so incredibly proud of you, Mike. Can’t wait to buy a ticket and watch you on the big screen one day.” 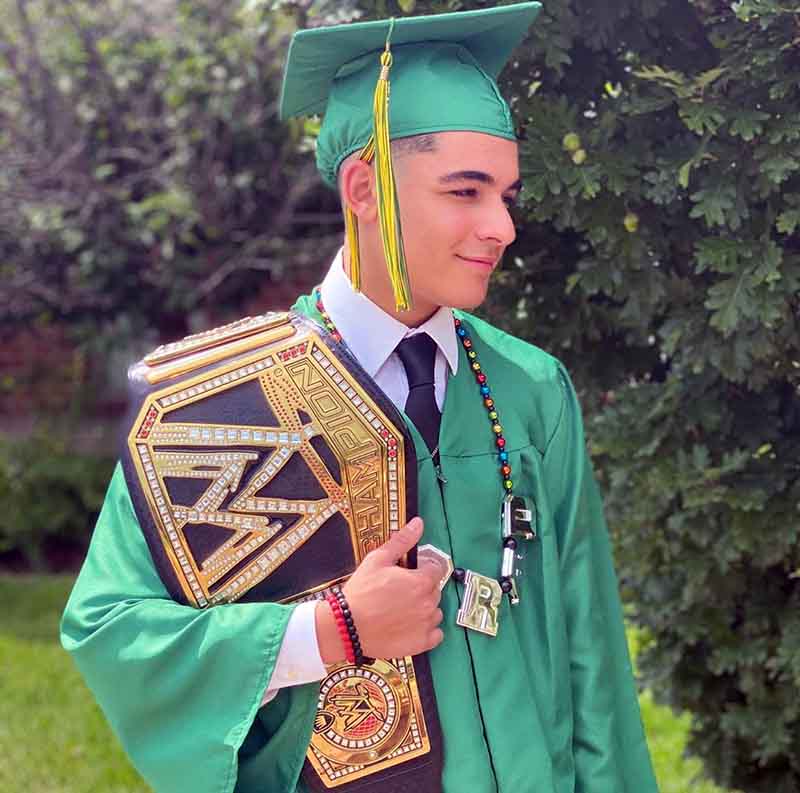 Her Middle Son, Rob, is a YouTuber.

Her second son, Rob, is currently a junior at his high school, but we don’t know his age and birthdate. He runs a YouTube channel, which he began in April 2017, and it already has almost 13k subscribers.

He should really thank his mother, Kim Kessler, for the shout-out she gave him when he started his YouTube channel, which was certainly why we came to know of it.

In Rob’s Youtube channel, you will find many gaming videos and reaction videos to WWE matches. He also posted his step-father’s video, Randy Orton, hitting him with an RKO on their family pool and returning the favor several years later.

Finally, her youngest son Anthony Kessler is 11 years old. He shares his birthday with his favorite wrestler, John Cena, which is April 23. Randy must certainly not be too happy knowing his son is a fan of his good friend but an in-ring rival. He is currently studying in 5th grade, so there is not much info about her. 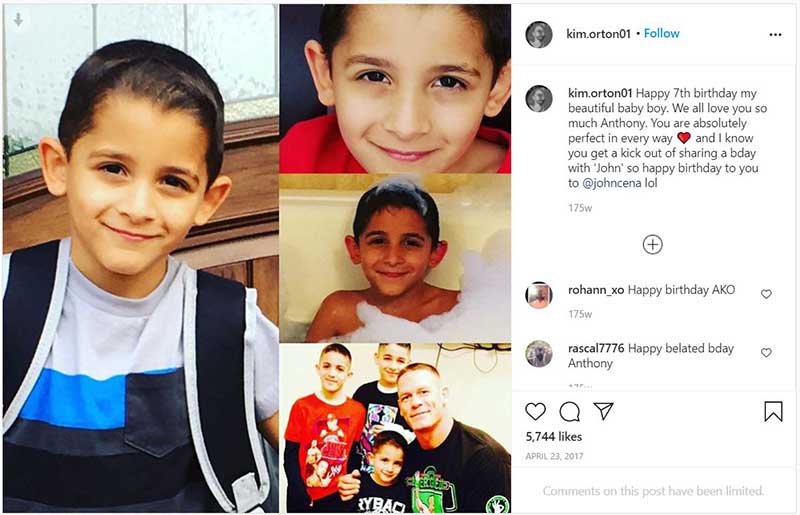 Kim Kessler wishing her youngest son, Anthony, on his birthday.

If Randy Orton is a good father to her sons, she is also a great mother to his daughter, Alanna Marie Orton. Alanna was born to Randy Orton and his ex-wife, Samantha Speno, on July 12, 2008.

Randy and his ex-wife were married on September 21, 2007, and were divorced in June 2013. It was a divorce done on mutual understanding, and it is her mother, Samantha, who has her primary custody while Randy Orton only has visitation rights.

He makes proper use of his time with his daughter, which is clear seeing how comfortable she is with the rest of her step-brothers and half-sister. 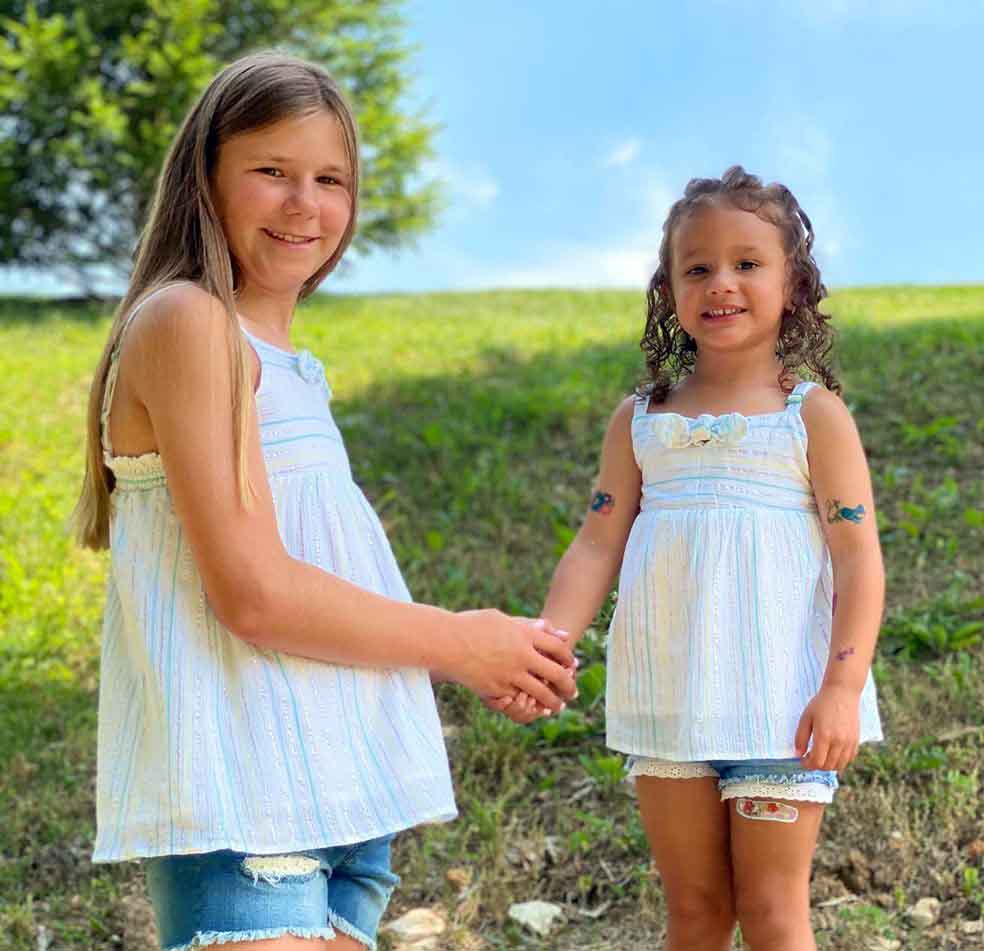 Kim Kessler also has another daughter, who is her only child with Randy Orton. Brooklyn Rose Orton was born on November 22, 2016. She will be turning 45 years old near the end of this year. Being the youngest, she is adored by her parents and all her siblings.

Kim Kessler already has a bit of controversy, but they are related to her husband, Randy Orton. In her initial years of dating Randy Orton, many fans from jealousy and spite began calling her a ‘gold digger.’ However, her only actual controversy came with Kayla Gomez, who was another fan of Randy Orton.

Kim Kessler wasn’t doing anything controversial until now, but after the stalking and harassment, Kim and Randy began calling out Gomez for her actions.

Things began turning ugly when she and her husband became too personal and started calling her names like ‘Ms. Piggy’ and ‘The Latino Miss Piggy.’ Later both the husband and the wife would block the woman and call it quits on their puny feud.

Was Kim Kessler Arrested in the Past?

Kim Marie Kessler does not have any criminal past that we know of, but we did a thorough search on popular demand. It turns out that it was just some mistaken identity. A woman by the same name as Kim or Kimberly Kessler was arrested in suspicion of murdering her hair salon colleague, Joleen Cummings, in 2019. 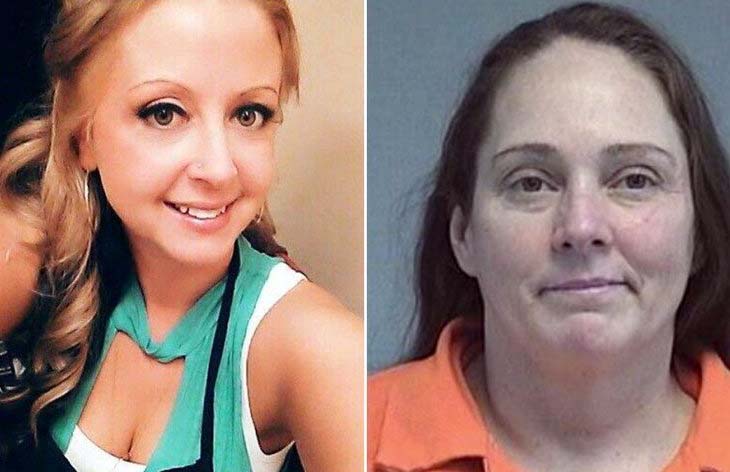 It turns out that Kim Kessler, in question here, comes from a shady past. She has been missing since 2008, although her mother only filed a report missing in 2012. Ever since then, Kim Kessler had lived with new names after committing identity theft; the most recent at the time of her arrest was Jennifer Sybert.

This Kim had tons of other violent and anti-social behavior in the past and her 18 aliases from identity theft. Luckily, she is behind bars for no, and the victims of the crime will get justice.

If you follow Kim Kassler on her Instagram or even know her a little, you know she takes fitness seriously as her husband, a professional wrestler. She is pretty fit by our standards, but she says that 4 kids have certainly altered her physique largely. She has long since lost her six-pack abs for one. Also, mothers have it harder to achieve it.

Posting these pics so I can start holding my self accountable for what I want to look like. I want to be stronger, I want to have a six pack like I did before I had kids and I want to be healthier. People say oh you look great you’ve had 4 kids, but everyone knows it’s how YOU feel about yourself that makes all the difference in the world. I WANT to look better and FEEL better about MYSELF when I look in the mirror. I know I don’t have to far to go to be happy so I’m going to randomly post pics of my progress so I can keep the drive that I have right now going. It takes ALOT for me because I do love eating cookies, and pizza and cakes and ice cream and candy so I’m gonna cut most of that stuff out and really REALLY try now. The older you get the harder it is to look how you want. I’ve been blessed with good genetics, so I’m finally gonna take advantage of it and put myself into gear. Sorry for the Schpeel lol. Who wants to join me? Take pics of yourself and post them with me and let’s see the progress together. I know @giovannaangle is doing it with me. Who else is down?? 💪🏼🦵🏼

Nonetheless, she has set out to achieve six-pack abs once again since July 2019. In a lengthy IG post, she wrote,

“Posting these pics so I can start holding my self accountable for what I want to look like. I want to be stronger, I want to have a six-pack like I did before I had kids and I want to be healthier. People say oh you look great you’ve had 4 kids, but everyone knows it’s how YOU feel about yourself that makes all the difference in the world. I WANT to look better and FEEL better about MYSELF when I look in the mirror”

She further wrote how she would be posting updates about her resolution because she does love to eat cookies, pizza, and other stuff, which will definitely halt her wish. We have full belief in Kim, who is yet to achieve her goals but seems to progress. 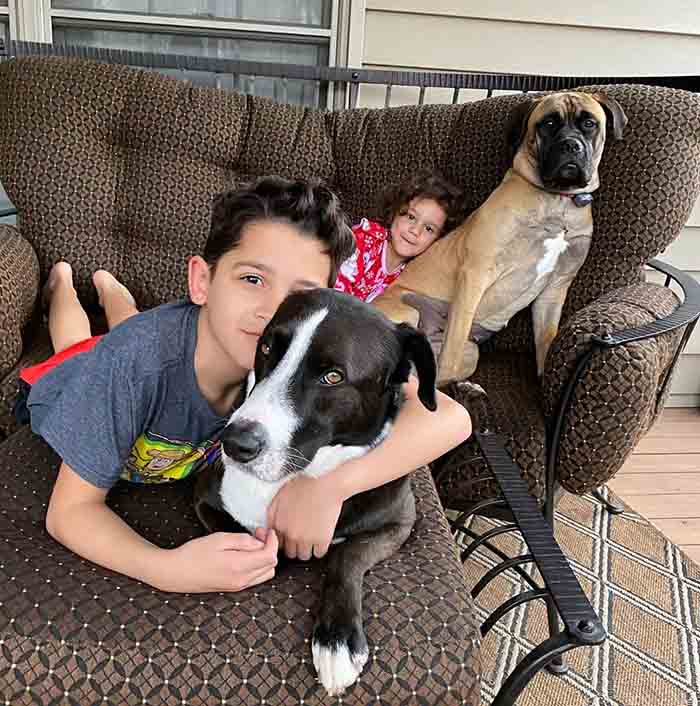 Kim Kassler’s children with her dogs.

“Not only is she the best mom, but I know she’s the best sister, aunt, and friend, Anyone, could ask for.” 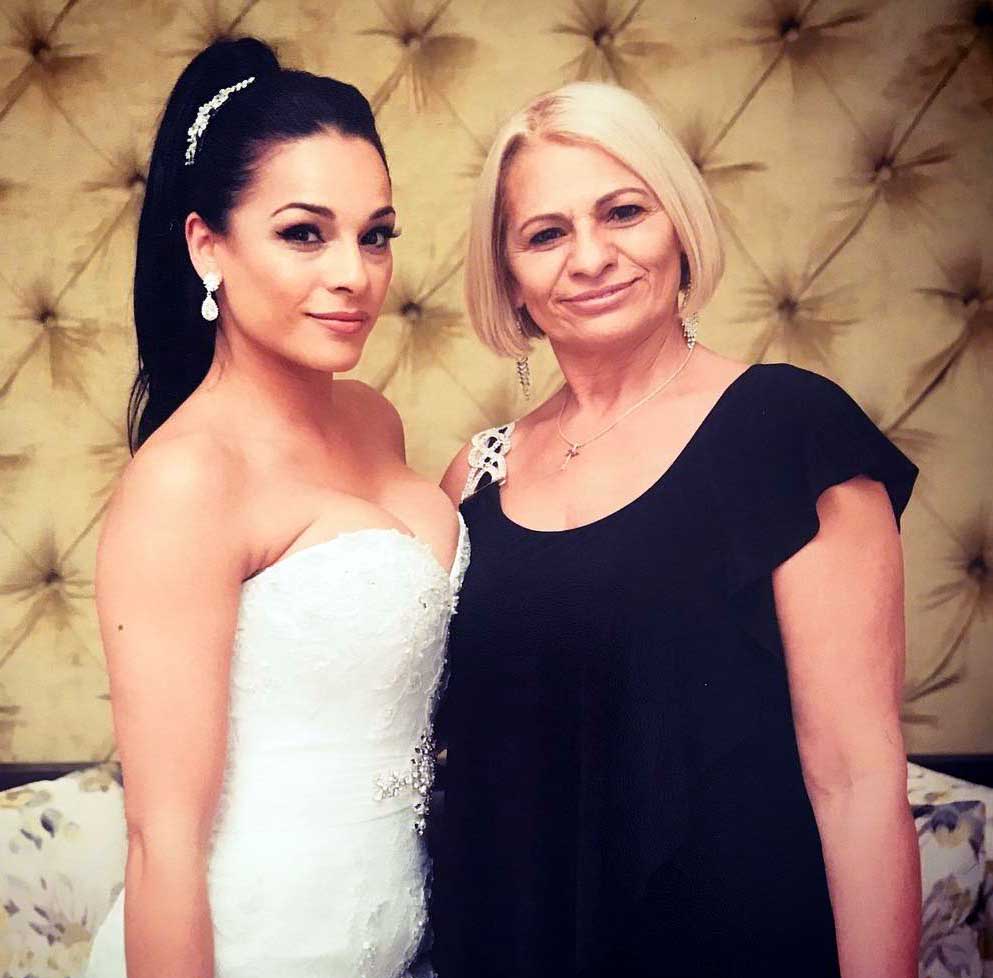 Kim Marie Kessler with her mother.