‘Good Bones‘ is low-key, one of the best shows on the HGTV network that cannot gain the same popularity as big and long-running names like ‘Fixer Upper‘ and ‘Flip and Flop.’ The show features mostly the mother and daughter duo of Karen E Laine and Mina Starsiak Hawk, but sometimes another family member completely steals the show from under them.

We are talking about Mina Starsiak’s brother, Tad Starsiak, who leads the demolition team and helps in the renovations and designs’ thought process.

Tad Starsiak is not Married but Dating.

Tad Starsiak is not a married man yet so, he does not have a wife. However, we can see why people will think he is married since Tad did strike pretty good luck in his dating life. He is currently dating longtime girlfriend, Christina Eslinger, since at least 2018. They are so close that people can easily confuse Christina to be his wife instead of his girlfriend.

In Valentine’s Day, the couple exchanged some meaningful and romantic words on social media, cementing their love. 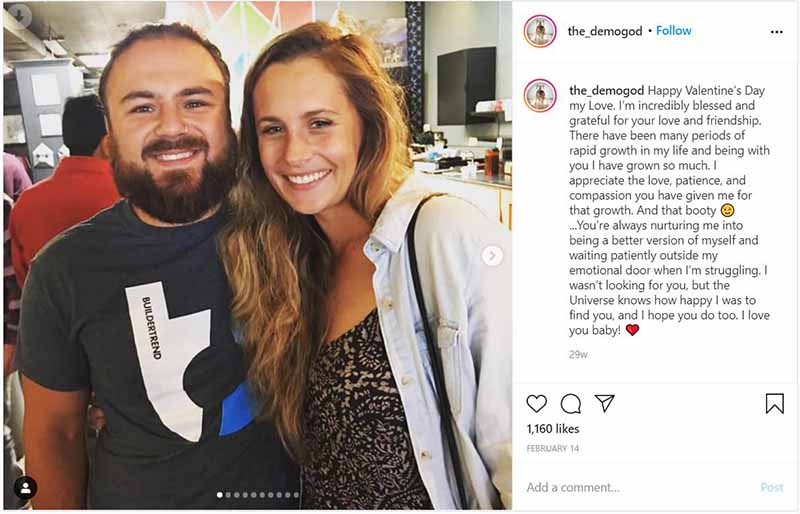 “I’m incredibly blessed and grateful for your love and friendship. There have been many periods of rapid growth in my life and being with you I have grown so much. I appreciate the love, patience, and compassion you have given me for that growth,” Tad wrote ending with a joke, “And that booty.”

“You’re always nurturing me into being a better version of myself and waiting patiently outside my emotional door when I’m struggling. I wasn’t looking for you, but the Universe knows how happy I was to find you, and I hope you do too. I love you baby!”

In response, his girlfriend also posted a series of photo writing,

“I have so many things too inappropriate to say on Social media. You know.. good bones, giant tool-wielding, dirty handyman, type things🤤🤷🏼‍♀️ … but the things I can say… I know neither of us knew what we were stepping into when we went on that first date.” 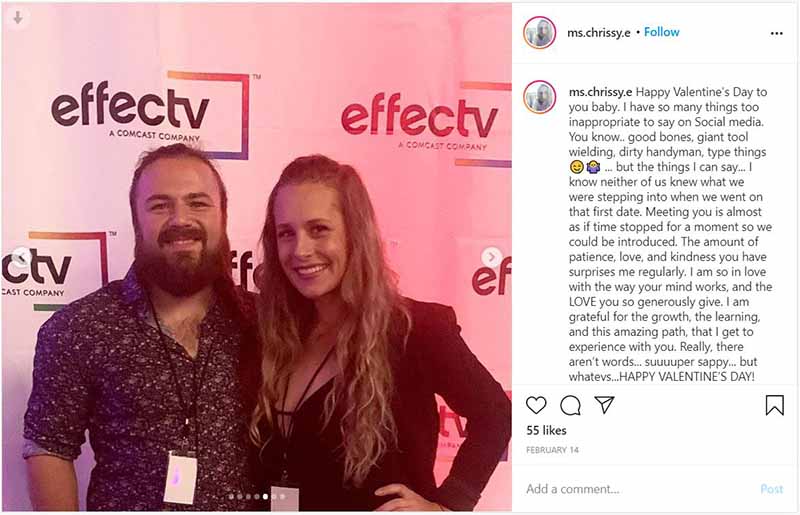 Moreover, she also mentioned the first time they met and how it felt like the time had stopped to allow them to meet properly. It sounds like a scene from a cheesy romantic movie.

Tad Starsiak’s girlfriend, Christina Eslinger, is also in the same business as Tad being a realtor and broker like his sister, Mina. She works for the ‘Talk to Tucker Realtors‘ as has a separate Instagram profile for her work and business, @flippinrealtor.

She lives and works in Indianapolis, Indiana. Apart from going over and beyond for her profession in real state, she is also very religious and loves to do charitable works. She explains,

“In my free time, I am involved in my church, where I serve with the Children’s care and participate in outreach programs. I am also developing a sustainable housing project, where my vision is to fulfill the housing needs of the victims of drug abuse, economic hardships, and domestic violence.”

Everybody who is the fan of the show knows that Tad Starsiak is only the half-brother of Mina. He is also not the real son of Karen.

However, Mina and Tad do share the same father, Casey Starsiak, who was a former lawyer. Casey Starsiak and Karen Laine were married and divorced when Mina was still very young. He later remarried a woman named Cheryl and gave birth to Tad and his little sister Jess.

Casey’s marriage with Tad’s mother would also not last and end in a divorce. His mother remarried her ex-husband, who she was married before to Casey Starsiak by the name of Lenny, who is a contractor. Tad still considers Lenny a contractor.

Mina and Karen tried their best to explain their entire family tree but could confuse us even more than clear everything because of all the marriages and divorces.

Well, Tad certainly loves his blended family very much. He credits Karen still be his mother, who was there for him in his rough time as a parent and teacher.

Tad Starsiak is also close to his sister, Mandl as his brother-in-law, Steve Hawk, and his nephew, Jack Richard Hawk. He even cried after his sister revealed to him recently that she was pregnant with her second child. 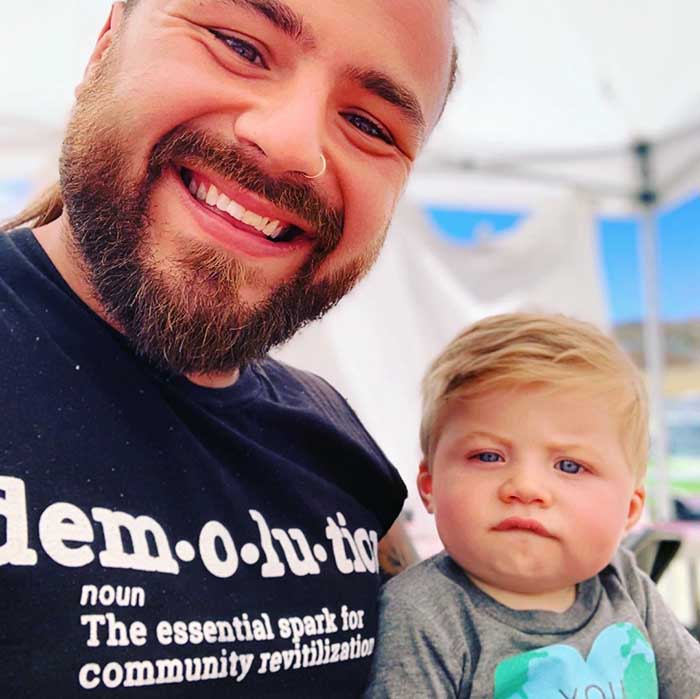 Unfortunately, Tad lost his mother, Cheryl, a long time ago. She died on November 20, 2005, and Tad wrote an emotional message for her mother on the 14 years of her death anniversary in 2019.

He gave tear-jerking details on her mother’s struggle with drugs and psychological problems. Addiction to a bi-polar person is never a good combination.

He shared that while most, he would remember only good things about his mother, but this time, he was also looking back at “not so warm” memories.

He looked back at how he found out that his mom had died through a drug overdose a couple of years later after his mother’s death when he was just 14 years old.

Today marks the 14th anniversary of my mother’s passing. Something pops up in my mind that making posts after 14 years is unreasonable. Will I do this forever? I don’t know, but after 14 years her death still teaches me, and I enjoy sharing what I’ve learned with all of you. • Each year I have always focused on the warm things about her. Her sorrel brown eyes, her electric energy, the energy with which she loved us kids. This year I want to be a bit more vulnerable and mention the not so warm things. • I was 14 before I found out how my mom truly died. I found out she had a drug addiction and had overdosed. I can’t tell you the anger that coursed through me. The self doubt that I was worthy of love because my own mother didn’t have the resolve to beat her addiction. I took her overdose as having everything to do with me and my self worth. • At 26, with 12 years to look back on my original conclusions my conclusions have changed. Ive learned much more about my mom’s life. She got beat as a kid. She had an abortion at 14. She was bipolar and I’m not sure ever really experienced a healthy relationship. Always struggled financially. She had a difficult life. • These details all point to a valuable lesson 🚨Often we take the actions of those we love and we make them about us. We measure their actions against our worth and let that define us over the course of our lives. 🚨Maybe your dad left? Maybe your mother wasn’t motherly? Maybe someone you love is struggling with addiction? These don’t say anything about you. Again, these don’t say anything about you. It doesn’t mean that they didn’t care. It doesn’t mean you are unworthy of love so don’t let it play out in your relationships. 👉🏽A person is a result of what’s happened in their life. Some experience things that hardened them. That were unhealthy for the psyche and they turned out the way they did. Don’t continue the cycle of your loved ones by letting those things in turn affect you and harden you. Forgive them. Release the anger and definitions you’ve applied to yourself and to your life….thanks for all the lessons momma. I miss you. I love you ☝🏽

He wrote, “I can’t tell you the anger that coursed through me. The self-doubt that I was worthy of love because my own mother didn’t have the resolve to beat her addiction. I took her overdose as having everything to do with me and my self-worth.”

You see, Tad had to bounce houses after his mom’s death through the age of 12 to 16 years. However, a retreat to Colorado by Hindu nuns and monks or Brahmacharis taught him meditation. It changed his life forever and helped him deal with tough times.

It would take him 12 years to reevaluate his mother’s death writing,

“I’ve learned much more about my mom’s life. She got beat as a kid. She had an abortion at 14.”

“She was bipolar and I’m not sure ever really experienced a healthy relationship. Always struggled financially. She had a difficult life.”

In the end, he had one lengthy message for all the other people who also grew up with absent mothers or other similar problems of drug addiction and mental problems in the family. It read as follows,

“These don’t say anything about you. It doesn’t mean that they didn’t care. It doesn’t mean you are unworthy of love, so don’t let it play out in your relationships. 👉🏽A person is a result of what’s happened in their life. Some experience things that hardened them.”

“Don’t continue the cycle of your loved ones by letting those things, in turn, affect you and harden you. Forgive them. Release the anger and definitions you’ve applied to yourself and your life….thanks for all the lessons.” 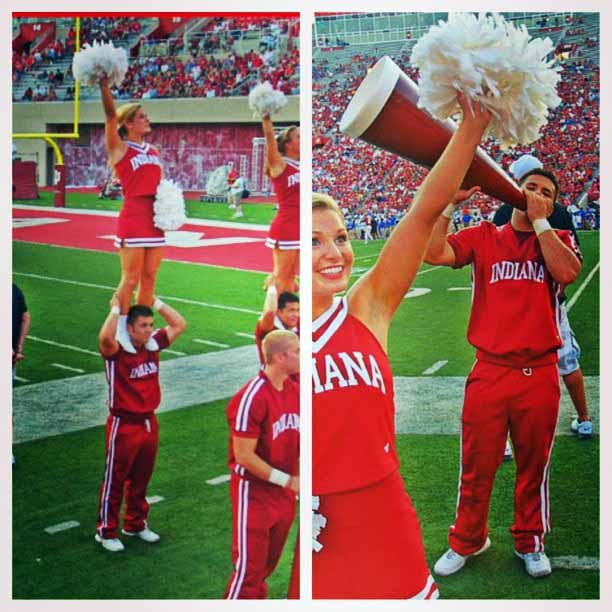 Tad Starsiak was a cheerleader in college.

2019 has been a year that will forever stand out to me. So much potential energy of the past few years became kinetic this year. I danced in front of 400 people and raised $31,000 dollars for the Kids at Riley Children’s Hospital. I shortly after joined the non for profit as a committee member. I got to go to Coachella with some of my best friends and felt incredibly alive. Not long after I went to Bonnaroo with a few other friends. There’s something about music festivals that make you feel so alive and in the moment, especially with those you love. Besides the fun, we as a team @twochicksandahammer watched season 4 air of Good Bones. We are finishing up season 5 and getting the batch of houses ready. I got the opportunity to be on two other shows, one being in Cali, and shot my first few commercials. I might even be working on a book too 😉 And to top it all, I found an incredible woman who loves me in indescribable ways. Most of the time it’s not her words that say how much she cares. It’s her smile and the depth and glow in her eyes… 😘 2019 I have loved you. You have grown me. 2020 will be an even bigger year, not just for me, but for us all. It’s so time to be that change you want to see in your life. To be confident and chase after it. It will come to fruition if your belief is strong and your work ethic is as strong too. I love you all like family. I wish you all the best heading into a New Year. Peace, love, and light ❤️