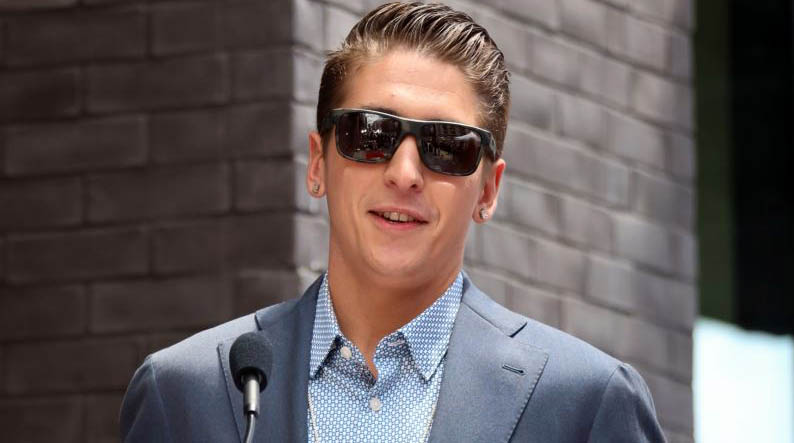 There can genuinely not be a healthier father and son relationship than the one that invites healthy competition between the two. When your father is someone as iconic as Guy Fieri, you certainly have to bring you’re A-game, but it looks like Hunter Fieri has it in his blood and experience not just to take on his father but “one-up” him. Here is how Guy Fieri’s son, Hunter Fieri, is setting out to follow in his father’s footsteps to become the next big Food personality on TV.

Learn about Hunter’s relationship with his father and also his other family life. Also, is he dating anyone? Find out through his complete bio on his career and net worth.

Hunter Fieri recently turned 25 years old. His father, Guy Fieri, was the first to wish his son a happy birthday on Instagram. Along with Hunter’s series of photos with Guy and one with his little brother, Guy Fieri wrote, “You are one of a kind. So proud of you.”

Happy 24th Bday @hunterfieri! You are one of a kind So proud of you

He was born in the USA around ten years before his father’s climb to TV fame by winning 2006 season 2 of Food Network Star. Hunter Fieri’s mother is Lori Fieri, and he has one younger sibling, a brother by the name of Ryder Fieri. His younger brother is more than nine years older than him at 15 years old, born on December 31, 2005. 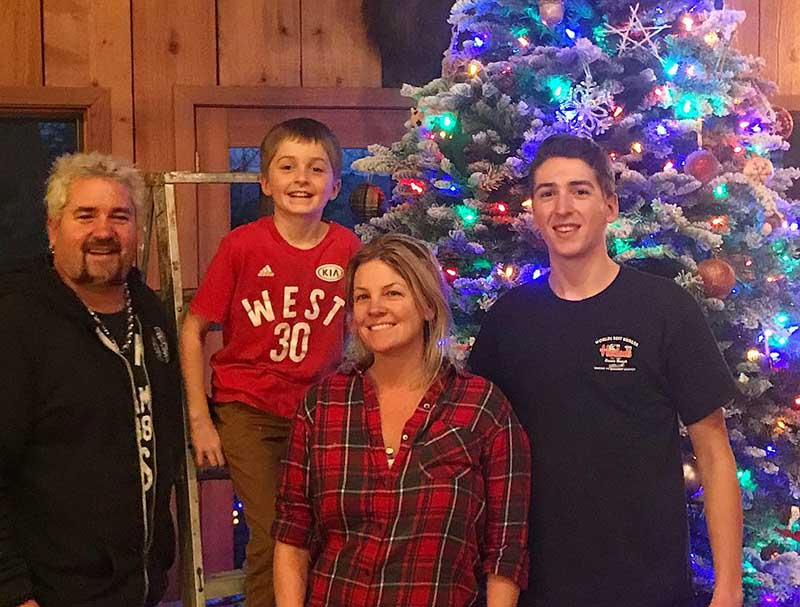 Hunter Fieri with his father, mother, and brother

Hunter Fieri, along with his mother and brother, were already a part of Guy Fieri’s many food shows over the years, but now that he is growing up to be a fine man, it seems he is taking on the role of a proper TV presenter. It is not that surprising considering how he’s already planning to be a chef and a TV personality.

In middle school and throughout high school, he was an avid athlete playing basketball and soccer. After graduating from high school in 2015, he went on a European vacation. They visited 13 places all around the continent, from Greece to Switzerland to France, experiencing the food culture everywhere they went. Their experience was caught on camera and became subject to the 2016 series ‘Guy & Hunters European Vacation.’

The pair are set to return upon Hunter’s graduation from college to go for a more challenging Asia adventure. He recently also graduated from The University of Nevada in Las Vegas, studying Hospitality Management.

So, we are sure his new project with his dad in already underway. His father, Guy Fieri, is also then alumni of UNLV, but that was certainly not the reason he chose to study here but solely for its reputation for being one of the best institutions for hospitality.

Dear eight pound, six ounce, newborn infant Jesus, I thank you for letting me graduate! Hey Ma’! I did it!! #rickybobby #UNLV – thank you #quizlet #chegg

Hunter Fieri, Already a Celebrity Chef by working with his father.

Hunter Fieri, at an early age, is pretty much an accomplished chef. His work with his father went a long time before it made it on TV. Hunter Fieri proudly holds the credentials as the line cook of his father’s signature California Restaurants, Johnny Garlic, and Tex Wasabi.

His father is no longer a shareholder of those restaurants, but he did not have to use nepotism to get his son the opportunity even when he was.

Hunter began as a busboy, slowly climbing the ranks to be the cook. He even went on to start a small business with a friend who was a mobile pizza trailer by the name of Kulinary Gangstas, where they made and served napoleon-style brick-oven pizza.

The company sounds like it was mildly successful, but more importantly, it was fun for Hunter, who also got valuable experience.

His recent appearance in his father’s staple food show ‘Diners, Drive-ins, and Dives’ portrays him as if he is his father’s co-host.

He certainly has appropriate experience of being in front of the camera appearing in the series since 2009 as well as Fieri’s other shows like ‘Guy’s Grocery Games,’ ‘Guy’s Family Road Trip’ and ‘Guy’s Big Bite.’

Will He Replace his Father?

He may very well even one day overtake his father in the show. It certainly is a probability that may have come across everyone’s mind.

Hunter Fieri, who already calls himself the ‘Prince of FlavorTown,’ certainly wants to be a chef and a celebrity chef like his father at that. Apart from his early childhood dreams of being a Supercross racer, he grew up to love cooking more and more.

“I didn’t really like anything else. I liked to be outside, and I liked the construction and whatnot, but cooking is what it is. It’s what I do. It’s what we all do;”

is what he has to say.

When Guy Fieri also came to face the question of whether he will pass on the shows to his son, he jokingly said,

Guy Fieri was also ready to send his son to none other than Gordon Ramsay for training right out of high school, but he knows his son is strictly against such nepotism tactics.

However, if he still decides to go after college, Fieri is more than happy to do it. We may not know when Hunter will outdo his father as a celebrity chef, but it looks like it will be on his own two feet when he does.

Hunter Fieri, over the years, has got to become friends with many celebrities in his career, but we have never got to see the strange pair of Guy Fieri and ‘Ghostbusters’ actor, Bill Murray. Well, we got to see it in May of this year when not the two actors but their sons competed to see who could make the best nachos.

Murray’s son Homer is also in the food business, an owner of ’21 Greenpoint’ in Brooklyn and ‘Caddyshack Sports Bar and Grille’ in Illinois.

The competition was held virtually with two judges; Terry Crews and Shaquille O’Neal as the judge. The event’s proceeds would go to pay for Guy Fieri’s restaurant employees who are not earning correctly due to the lockdown.

Bill Murray, who already has raised over $20 million for similar food workers through the National Restaurant Association, was more than happy to partake in the competition with his son.

Hunter Fieri and Guy Fieri certainly have a strong bond, proven by Hunter’s recent actions to his father. Many may know that Guy Fieri finally got his Hollywood Walk of Fame recently, making him only the third celebrity chef to attain that achievement (the first two being Wolfgang Puck and Bobby Flay). His wife, sons, and other friends like actor Matthew McConaughey were there to support him.

As soon as he got the star in early June, Hunter Fieri also got a tattoo of his father’s Hollywood star to commemorate his father’s achievement on his left bicep. Hunter put the photo of his new tattoo along with other pictures from the even with the caption;

“What a mind-blowing day!! Congratulations on receiving your WOF star, dad! You are so dedicated and talented, and you absolutely deserve this! I was beyond honored to speak at your ceremony! Love you pops, CONGRATULATIONS!! 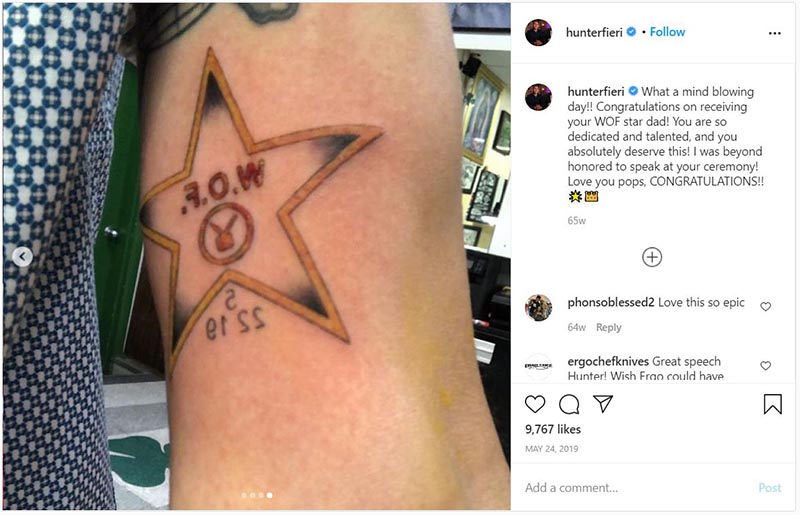 Hunter Fieri also has a bunch of other tattoos. His first tattoo was in 2014, which seems like the word ‘Ride’ was written on his right ribs. His second tattoo was in 2016 of the outline of the map of California with a bear, trees, and a star symbolizing the Californian flag. 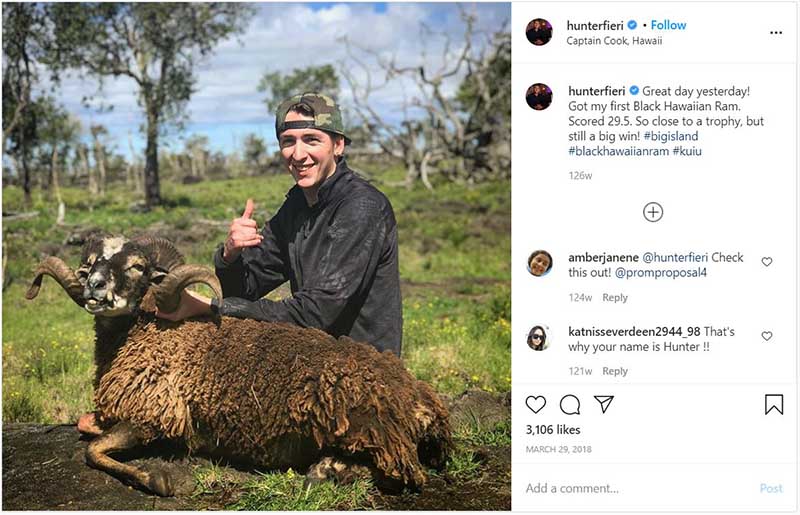