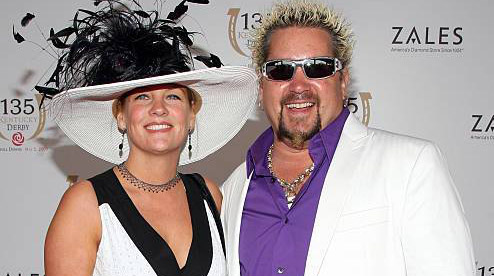 Over the years, only a few chefs have been able to gain worldwide stardom at massive scales. Most chefs like Gordon Ramsay, Jamie Oliver, and Bobby Flay reach that fame through Michelin-grade cooking. Then there is Guy Fieri, who has become their equal from consistency as a TV personality. However, since he is already world-famous, let us instead talk about his wife, Lori Fieri.

How Lori and Guy Fieri met?

Despite his classic 90s looks, Guy Fieri has always established himself to be a family man actively involving his wife and kids in his shows.

Well, no more, we finally have some inside scoop on Guy Fieri’s wife, Lori Fieri, including their account of how they met, and it was as dramatic as you would expect. 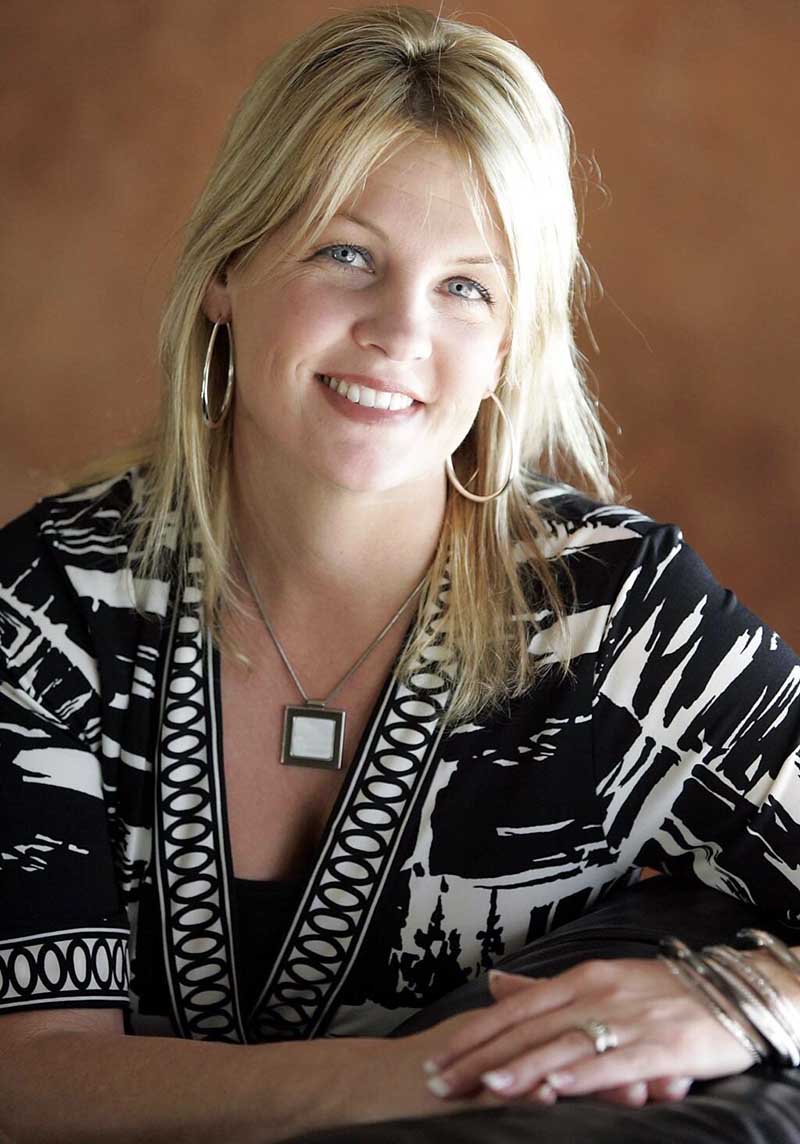 Guy and Lori met in their early 20s in a restaurant in Long Beach, California, where Guy was a manager. Lori was there with a friend who was recently let go from the restaurant not so long ago.

As per the company policy, Lori’s friend was not allowed to dine at the premises, and as a manager, he was to make sure to handle the situation. However, as he went to talk to the woman, he saw a set of piercing blue eyes looking at him from behind the woman.

Yes, those eyes belonged to none other than Lori. Guy Fieri was trying to diffuse the situation by telling the woman that she would have to wait a few more weeks before coming back into the restaurant as a customer.

Lori did not think twice after that and jumped into her friends’ divorce. Guy Fieri recounts the conversation going something like follows;

“‘You can’t make us leave,’ and I was like, ‘You don’t have to.’,” he said. Guy asked them to keep a low profile. They agreed, and the three got to talking.

It was Love at First Sight.

It may look like it was not a very romantic encounter, but for Guy Fieri, it was love at first sight. Even his future wife glared and argued with him for most of their first encounter; Guy fell in love with her.

Furthermore, it was just a chance encounter for the love birds too. Lori Fieri was visiting her friend when on a cross-country trip from Rhode Island to San Diego. “She never made it to San Diego,” Guy says, laughing out loud. It was a pretty good reason to cancel the trip, considering how Guy was her future husband and father to her children.

It was too great of a first date for Lori not to give second thoughts too. Guy picked her up in a red Camaro, which shows us that Fieri was as much into cars and the color red as he is now. Instead of going to any one of California’s fancy restaurants, Guy chose to cook for her.

Chef Guy Fieri doesn’t remember what he cooked, but only that it was enough to blow her mind. After all, she was a food lover like him.

“That was a long time ago. I don’t remember what I made, but I do remember it was quite an epic time,” he said. “The first time I cooked for her, she was just like, ‘You made all this?'” The couple was inseparable since then became the power couple you know today.

Lori Fieri married Guy Fieri in 1995. They share two children, both of whom are sons. His older son’s name is Hunter Fieri, born about a year after their marriage on August 13, 1996. Similarly, they gave birth to their second son, Ryder Fieri, on December 31, 2005.

Ryder Fieri is still only 15 years old (turning 15 years in 2021) and is too young to have a career except for a few appearances in his father’s shows.

#TBT to the #RockinRoadTrip with the family earlier this summer. Good times with great people! 😎

Hunter Fieri, on the other hand, is slowly growing up to be more and more like his father. He is set to become a chef and a celebrity chef at that. His recent features in his father’s shows display that he is clearly like a co-presenter or co-host of shows like ‘Diners, Drive-Ins and Dives.’

In 2015, he and his father went on a European vacation to experience the continent’s food culture, all documented in ‘Guy and Hunter’s European vacation‘ in 2016. There is a strong possibility that Hunter may even overtake the show after his father.

Guy and Lori are also parents to Jules Fieri, who is 20 years old. He is the son of Guy Fieri’s sister, Morgan, who the family lost in 2011 from metastatic melanoma in 2011. Since then, Lori and her husband have raised Jules as their own son, so, technically, the couple has three children. 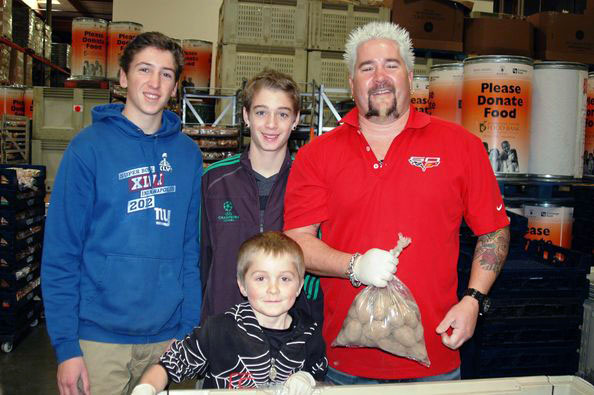 Lori and Guy Fieri are also parents to Jules Fieri, her sister’s son.

The Secret to Guy and wife Lori Fieri’s Long Marriage.

As much of a beloved figure as Guy Fieri is for the loyal viewers of his shows in the Food Network and pop-culture references, his flamboyant personality is not to everybody’s taste.

For one, the late great Anthony Bourdain was always vocal about his disdain towards the American Celebrity Chef’s looks and talents. It must also certainly take its toll to be married to someone like that despite falling in love with them.

We mustn’t forget that shortly after their first son’s birth, her husband blew up as a celebrity chef after winning the 2nd season of Food Network Star.

Shortly after that, he became the star of the hit show ‘Diners, Drive-ins and Dives‘ the following year. Since, along with other shows, DDD has proudly featured over 1,100 locations in the country and the world. It would also mean that she will have to sacrifice most of her husband’s time to his stardom. 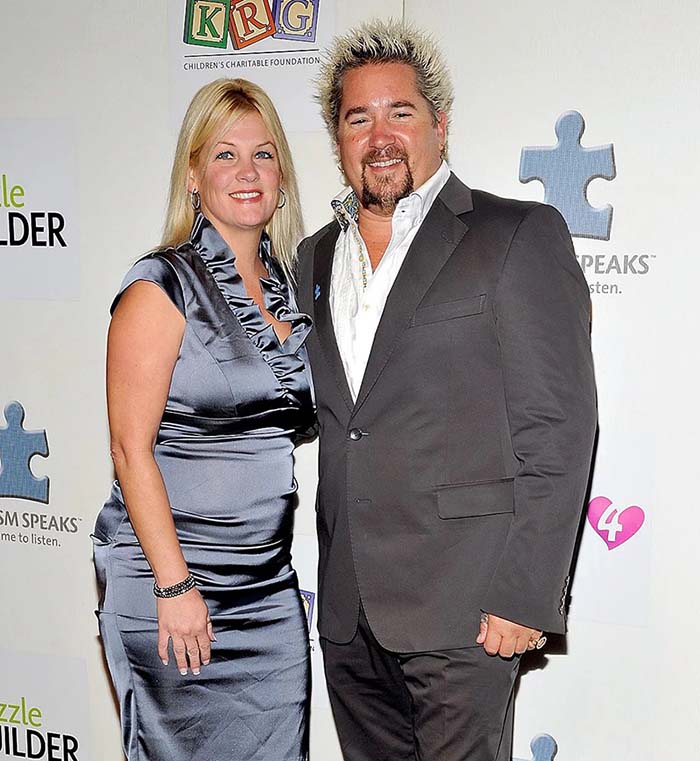 However, Guy Fieri was a master when incorporating his wife and kids in his show. He brought them with him as much as he could to the show’s sets, and since his entire family was big on food, they did not complain much.

“It’s all compromise and understanding,” the 52-year-old said on the matter.

Lori Fieri said that end of the day, no matter how far and long her husband goes from her, he always values and makes time for his family. The couples live happily in their home in Santa Rosa, California, and here is what Lori Fieri had to say about her and her husband’s best moment;

“Our perfect nights are really barbecuing in the backyard and the kids swimming in the pool,” says Lori. “We just hunker down at home. That’s his happy place.”

Lori Fieri would like her husband to change His Hairstyle.

The one thing more distinctive about Guy Fieri other than his convertible or fiery t-shirt is his hair and beard. His outdated frosted tips and partially blonde beards are iconic to him.

Guy Fieri has already told the epic story of how his iconic hairstyle came to be. One day, the guy was feeling adventurous and told his hairstylist, Christina Jones, to do whatever she felt like. It was the words he would soon regret as she gave him the frosted tips.

Fieri was in disbelief, but he did not have time to change it and went to work covering it up. Soon after, he also did the show with that look, and after a while, it just stuck with him.

You will still be able to find a few old pictures of Guy Fieri without the hair or the beard. As Guy Fieri’s wife, Lori, also recalls, he loved dawning a clean-shaven look and suits or other proper attire.

Guy Fieri’s old picture without his iconic hair and beard

While she is not mainly a big fan of her husband’s looks, she now understands how it is a part of his identity. And though she wants him to change his hairstyle, she will never forcibly ask him to do so because she doesn’t expect her to do the same if she were in his position.